Our Men’s Football Academy has a reputation for footballing excellence! We produce elite players who progress into professional and semi-professional football, and even gain international scholarships.

Hartlepool Sixth Form student Sam Milburn has shaved his head to support those affected by life-limiting illnesses and the death of loved ones.

Studying at home after face-to-face teaching at the sixth form was suspended and unable to get a haircut, Sam has braved the shave and raised over £500 for Alice House Hospice, a cause close to his family’s heart.

Setting up a fundraising page, the Football Academy captain smashed his target in less than a week.

Sam said: “To be honest I needed a haircut anyway and neither my mam or dad are competent at all with a razor and pair of scissors so I just thought I’d take the lot off.

“A lot of people have done the same so I thought it would be a nice gesture to try and raise money for the Hospice and give them some help during this tough time.

“Alice House is a charity that is very close to my family and looked after my grandparents. My mam and her sisters often donate bags with things such as grooming products and toothbrushes so the people there can hopefully have a better stay which I think it’s amazing.”

After sharing the results on Facebook, Sam admits he has received mixed responses from friends and family to his new look.

He added: “I don‘t mind it to be honest except for the fact I sunburnt my head the other day –that wasn‘t fun. My mam isn‘t the biggest fan of it even though she was the one that shaved my head whereas my mates thinks it’s hilarious.

“I don‘t mind just happy to have done it for a good cause.”

Posting on Alice House Hospice’s website, Senior Communications Manager Rebecca Jobson, said: “It is overwhelming to see the support Alice House has and I would like to say thank you to Sam and everyone who has made a donation or set up a Facebook fundraiser.” 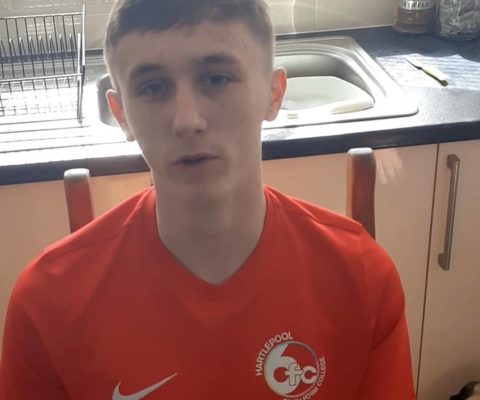